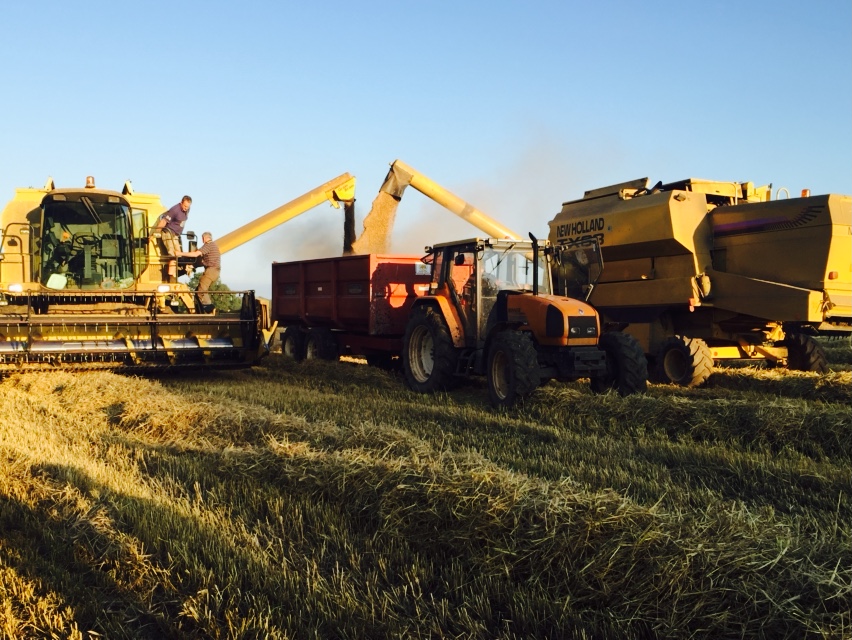 West Middlewick is a traditional dairy farm situated in the heart of Devon. Most of the food eaten by the animals is grown and harvested on the farm. Our sustainable approach to farming means we are planting meadows with wildflowers, looking after trees that are several hundred years old and maintaining our hedgerows so that they are full of food and shelter for wildlife. We are proud to be one of the first farms in the area to be awarded Mid Tier Countryside Stewardship by the government.

Our grass-fed cows, largely British Friesians and British Friesians Cross Jerseys, roam the green fields around the farm giving our milk its authentic free range label. We also have several more Jersey Crosses coming along in our herd. The cows originating from the Channel Islands produce so-called A2 milk that not only tastes great, it also tends to be kind on the stomach and have many other benefits.

The cows munch on the grass in the fields for most of the year. They also eat other crops we grow ourselves. The fields produce hay and silage (cut grass that is stored in an airtight bag) so that our cows have plenty of nutritious food to eat during the winter months. We also grow our own corn and grind it to produce meal (a bit like porridge oats) for the cows to eat. When we cut the corn, the straw is baled and stored ready to be used for bedding in the winter months when it is too wet or cold for the cows to be outside. We buy in some animal feed, known as cake, and in 2019 we moved over to soya free cake which the cows enjoy at milking time.

The cows are milked twice a day in the morning generally between 8.30 and 10.30am and in the evening between 5 and 7pm. The calves are also fed during these times. You can see some photos in the gallery and find out about our award winning milk here.

We run a ‘closed herd’ which means we don’t buy in any cattle as this helps us keep our herd healthy. We can trace many of our cows back several generations. Our herd is currently around 80 strong plus ‘followers’. The term follower refers to young stock – the young calves and heifers that one day will also take their place in the 1950s style ‘shippon’ for milking.

We also have 120 sheep, 3 sows and piglets, and approximately 100 chickens. You will also see rabbits, goats, Bella the donkey, geese and guinea pigs on the farm. Several cats patrol the farm buildings.

Rivers and the lake

The River Dalch flows through the farm – a real favourite for children who like a paddle. The water is beautifully clean and is now home to fish again. Otters have been filmed in the river and the river banks attract all sorts of wildlife. We have recently sown wildflower seeds in the meadows near the river and avoid the use of fertilisers here.

In 2000 we acquired a large 20 acre field known as the moor. It was always a wet field – unpassable at times which needed a lot of nurturing. Gradually we improved the drainage and enriched the soil and in 2010 we created a 20 metre (diameter) lake on the far western side. The lake is perfect for carp fishing and is now a haven for wildlife. We want to encourage nature to thrive around the lake and we are grateful to the Devon Wildlife Trust for providing several rare species of wild flower seeds – we are now attracting more and more bees and butterflies as a result. We are continuing to enhance the lake area with more tree planting. The trees provide an outlet for excess water and are a natural habitat for birds and wildlife.

Looking after the trees, fields and hedgerows

Close to the ‘moor’ is a field called ‘The Plantation Spot’. This charming small field has several large trees dotted across it. Trees and hedges provide a natural shelter for livestock – you will often see sheep and cows making use of a tree’s canopy to protect themselves from the worst of the weather. Across the farm there are large numbers of trees – many of which are several hundred years old including beech, oak and some ash.

Large trees are a feature of Devon hedgerows with trees often planted at intervals along a hedge. The trees and hedgerows provide vital sources of food and shelter. Our hedges grow on the traditional ‘Devon bank’. The Devon banks are mounds of earth several feet high with hedging planted on top of the bank. This provides a natural wind break and protects the fields by reducing soil erosion. When rejuvenating hedges we use the traditional approach of ‘laying’ – this entails making a half-cut a foot or so above the base of the hedging and laying the plant carefully on its side. The hedging reshoots and the cycle continues. This approach provides a rich environment in which all sorts of plants, British birds and wildlife can flourish. Hedges create safe spaces for wildlife, plenty of blossom for invertebrates and – by allowing fruits and berries to ripen – the hedgerows provide a great source of sustenance for overwintering birds.

Westway Mill is a special part of the farm, rich in history and biodiversity. It sits on the south bank of the River Dalch and dates back hundreds of years. More recently the mill has been used for livestock and is also invariably home to bats and other wildlife. The mill’s limestone floor, original cobbles and part of the original chimney stack have all been preserved.

Originally the mill used the power of the water from the Dalch to grind corn. The Old Mill Leat runs parallel to the river for about 300m and was vital for powering the mill. The river would be dammed up and the leat would then be flooded with water. At the right time, the sluices would open and the water would turn the mill wheel for a couple of hours – long enough to grind the corn.

In the 1970s Thos Gibson dug out the original Mill Leat to preserve it. The work included relaying the hedgerows which flank the Leat on either side. Take a stroll along the Leat down to the mill – it’s a very peaceful setting rich in biodiversity. If you are lucky you might hear a barn or tawny owl at the mill or perhaps a spotted woodpecker making its nest in one of the old trees.

If you would like to book a pitch or have any questions please email us at Stay@ westmiddlewick.co.uk or telephone: 01884 861 235. Or you can use form below.